In both of the classes I am teaching this term, I have heard classroom comments about how end-times theologies correlate with “fatalism”—which in turn seems to correlate with some flavor of politics that is Trumpian and/or Republican and/or shading off toward wherever (if anywhere) the alt-right becomes so extreme that our resident criminal in the White House is willing to exclude it as part of the conservative social formation.

Such claims about fatalism are very common in scholarship and media punditry—so much so that they can become clichés to substitute for thought.

Still the comments in my classroom struck me as notable because, in each course, I have assigned a section of my book (also reprinted here) that argues pointedly against this interpretation. Its point is not to deny that many end-times devotees skew conservative—everyone knows this—although I do insist that we must not lose track of the significant differences in how they articulate such conservatism (alt-right to centrist, flagrantly anti-Semitic to ostentatiously Zionist, policy-wonkish to individualistic and navel-gazing) nor forget that a sizable minority (with its own range of articulations) does not lean rightward at all.

Rather, the point at hand is how “fatalistic” is an imprecise way to characterize people who use end-times discourse, at best.

I agree that fatalism is salient in some cases—although such salience was more common before 1970, when the scholarly common wisdom took hold, than it is today. Even in earlier years, to accept that the self-proclaimed “apolitical” or “otherworldly-focused” rhetoric of many evangelicals was actually apolitical was mainly a mistake. We can restate the defensible parts of such interpretation more precisely. White evangelicals were then more complacent about and disengaged from most status quo policy debates—a stance I would call a functional variant of conservative cultural politics—and were more hostile toward and/or pessimistic about the best-known forms of religious activism in the news. During these years religious activism was associated with civil rights, anti-nuclear protests, and opposition to the Vietnam War. Thus it was not completely wrong to drift toward using the descriptor “fatalistic toward” as a rough synonym for the words “pessimistic about” something like Martin Luther King, Jr.’s vision of an integrated and egalitarian future society. (Along a parallel train of thought, we could pursue how being “fatalistic” about collective projects might drift toward a privatized neoliberal mode of living—a point that deserves more attention than I can give it in this short reflection.)

If all this is true, then the terms we need are “pessimistic about” (certain hopes for social change) and “hostile toward” (certain political visions). The supposed attitude of “fatalistic about” implies a sociopolitical stance often linked to a none-too-fatalistic praxis. 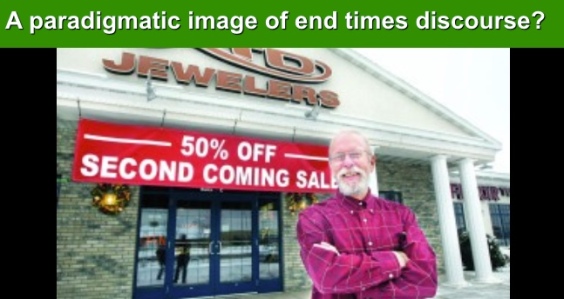 Did it make sense, around 1965, to call white evangelicals “fatalistic” about losing a religious-political battle with King’s coalition? By extension can we drift toward imagining them as still “defeatist” or “passive” today due to this supposed fatalism? Clearly this is an odd use of language—unless we manage to silo off end-times discourse from how evangelicals energetically built a network of private schools and made themselves central to Republican base from Nixon to Trump. And such siloing is improbable because all evangelicals think about the end-times at least now and then. Ever since the heyday of white evangelicals insisting that they had righteous “moral” values but lacked “political” praxis—a discourse that was still going strong when I began teaching in the 1980s, although already straining credibility by then—I have had less and less need, year after year, to persuade students that this discourse is politicized. People assume that now, sometimes too reductively.

Yet, somehow, through all of this, a trope of end-times thinking as “fatalistic”—which seems to be some sort of default reflex learned from… well, where?—seems like an undead zombie.

How can we kill it off?

Perhaps it would help to look at an article in last weekend’s New York Times. Mike Pompeo (who, as the Secretary of State of a superpower, would seem deluded if he truly sees himself as “fatalistic” in a sense of lacking power or agency) is in the recent news cycle, trumpeting how end-times beliefs relate to US policy toward Israel. He has spoken, for example, about a “never-ending struggle” until “the rapture.”

We could pause to ask how much Pompeo (or Trump, or certain megachurch pastors) may be pandering insincerely to constituents who are assumed to care about the rapture. It’s a fair question. But let’s move ahead until we arrive at whoever in this discussion has sincere end-times concerns. Without them, pandering makes no sense. After we get the dialog between Pompeo and such people into focus, in what sense can we call the result “fatalistic”?

If we assume an ordinary sense of this word, my provisional answer would be “hardly at all.”

Now, perhaps someone could object that there are “fatalistic” background assumptions in play—say, the assumption that no one will ever find a solution to the Israel-Palestine conflict, at least short of Israel crushing all dissent and then killing it off once and for all by smothering it. (But wait, would the latter be “pessimistic,” or more like a perverse form of utopian “optimism” given certain background values?) Is someone “fatalistic” if they assume the impossibility of avoiding cosmic war over Jerusalem—so why bother even trying for peace? I’ll grant those points, and obviously they are not trivial if they increase chances for a nuclear war.

Still, having said that, still Pompeo’s policy-making seems on balance quite different than “fatalistic.” And this point is generalizable. As I argued in my chapter that my students supposedly read, there is no necessary contradiction—and in fact there are natural affinities—between working to “defeat God’s enemies” and believing that God is fighting on your side. Something similar is true if you don’t believe in God but believe in “History” instead, like certain Marxists and secular liberals impressed by the inexorable logic of capitalism. Such people still manage to set some priorities and exercise agency (possibly with improved morale) despite such structural considerations—and so can fundamentalists.

(By the way, for you theological wonks, please do not assume that I am running a standard—and, let’s say it, clichéd—distinction between pre- vs. post-millennialism or worrying very much about Dominion theology. I am primarily talking about the de facto lived meanings of premillennial discourse.)

In this case, Pompeo projects a confident and optimistic sense of agency. What end-times resonances may add, for some people, is extra confidence about God being on their side, a system of logic (to outsiders bizarre but to insiders carrying some authority) to bolster assumptions about who constitutes God’s friends and enemies, and a way of possibly reinforcing a network of people carrying such agency forward.

But here the weasel words in my previous paragraph—“some people” and “possibly reinforcing”—become interesting. What if end-times arguments also sometimes erode or fragment, rather than reinforce, the overall projects? What if public appeals, like Pompeo’s, to arguments based on a none-too-self-evident reading of the book of Daniel might, in practice, create fault lines within an assemblage of social forces moving such policies forward? If so, by all means we should notice this. We need to understand all the salient modes—both “end-times” and “not-end-times”—of arguing for and motivating a policy. Might they work at cross-purposes? There is no doubt about the importance of thinking this through.

It is just that “fatalism” doesn’t have very much to do with it—at least not consistently nor at the root. And it might distract us.

Stated more positively, I suggest that whenever we encounter end-times discourses—which leads toward a far wider range of issues than just policies toward Israel—we approach case by case. What are people “fatalistic” about” (or, usually better, what are they pessimistic about, and/or demonizing, and/or pursuing privatized solutions to)—in specific? If their ideas spur them to “fight Gods enemies” (whether “fatalistically” or with unrealistic expectations of success), exactly how do they operationalize the pesky word “fight”? What “enemies” do fight, specifically?

If we are disturbed by the answers that we find, case by case—and certainly the Pompeo case is disturbing—then it is time to look for fault lines in the argument and try to widen them. But “fatalism” as a tool of analysis will be, at best, only one of several tools we need at this juncture.